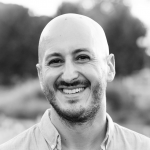 December 2, 2017 In Secondary By nctevillage

The Line Between Mr. Keating and Keeping It Real

Looking into Jeremy’s 16-year-old face, I poured my 21-year-old soul into the role of a lifetime. In my oversized shirt and ink-stained tie, I was giving an Oscar-worthy performance of the eager young English teacher who defies all odds to make a difference in the lives of all those he teaches. My active imagination had no trouble picturing myself slipping into the role of the inspiring Mr. Keating portrayed by Robin Williams in Dead Poets Society.

Despite my best intentions, Jeremy’s sleepy, adolescent eyes remained permanently fixed on the crisscrossing pattern of black lines on the floor. His shaggy, brown hair framed a quiet, stoic expression like curtains, and his body looked small in the two-sizes-too-big flannel jacket he would later label his “bum jacket.” Leaning forward in the adjacent desk, putting on my best counseling face, I tried to give my very first “pick-yourself-up-by-your-bootstraps” pep talk.

It had only been four weeks into the first school year of my teaching career, but I could already tell Jeremy was going to be a handful—maybe even a troublemaker—in my American Literature class. He wasn’t completing assignments, and he wasn’t participating in class, except to make an occasional, inappropriate joke. (Like the one that landed him at this desk after class, listening to me now.) During class discussion, Jeremy’s typical posture was exactly like he was now: a lazy, dead-man’s slouch, arms crossed, and legs stretched out in front of him like the hands on a grandfather clock. His facial expression, however, was never typical, oscillating between a goofy grin and a withdrawn absence, depending on the day. Right now he looked very withdrawn.

“Jeremy, I just think you have so much potential,” I pleaded wholeheartedly, emphasizing the word potential.

I talked in circles for about five or six minutes, as if I had forgotten the lines to some great monologue with no one to prompt me, and I could tell I was overdoing it. I leaned back in my chair with a sigh, and simply told him to try and do better. Had I blinked, I may have missed the slight nodding of his head that told me he either heard what I was saying and he was going to try to take advantage of all that glittering potential, or he just wanted to get out of there as fast as possible. Deep down I knew it was the latter.

Days passed and I quickly became enveloped with papers and more papers to grade, staying up regularly until two a.m. and getting much too little sleep. Jeremy remained a mystery in class, but I started to notice something in him not present in many of his classmates, likely the reason I reached out to him that day after class. This unique quality may have been “potential,” but I don’t know if any word could describe this secret spark he held. To this day I find that adults too often oversimplify young people, finding easily categorized buzzwords like “undisciplined” or “at risk.” Often they simply declare, “he just has so much potential,” when the adolescent mind is a whirlwind of paradox that eludes language. Had I, within only a few months of teaching, already entered adulthood and forgotten it all? I could certainly remember the paradox I was at 16. In fact, I knew the paradox I was at 21 (and still am at 39)! If I was to understand Jeremy, I was going to have to do a little more than put on a tie and imitate Robin Williams. I was going to have to get real and be myself.

Another day after class, I asked Jeremy to hang back for a second and stumbled through a bit of honesty. “I’m sorry for writing you off the other day as a lost kid with a ton of potential who just doesn’t know how to apply it. I understand that life is messy stuff. If you need someone to talk to, you know where to go, right? I’m always here.” There was no performance or grace in what I said or how I said it, but Jeremy responded with a smile and a much more recognizable nod before heading off to algebra class.

Over the two years I taught at St. Thomas Seminary and Boarding School, I came to realize why this unique spark I saw in Jeremy was so familiar. That spark of Jeremy’s was the same kind of spark hidden inside the teenage boy I had been; a light I never understood was there until I started to see it in my students. For those first years as what I call an “infant teacher,” I let that adolescent boy inside me finally get a chance to romp and play. At 21, I could finally put my turbulent teenage self at ease.

There have been other significant relationships with students since Jeremy, but I owe the most to Jeremy for teaching me so early in my teaching career that I am a more effective teacher when I am just me. Even when I’m surrounded by inspiring teachers (and yes, a picture of Mr. Keating still hangs in my classroom), each with his or her own unique way of making the art of education look so easy, I do myself no favors by trying to imitate their methods. I have to find what works for me, and that always starts by dismantling the stage in my classroom every August. My acting days are over.