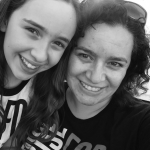 September 2, 2017 In Secondary By nctevillage

Getting Out of My Own Way!

What do YouTube stars, Harvey Milk, and Wendy Davis all have in common? They were all nominated by students I had the privilege of working with during a project titled “Nobel Prize for Democracy In Action.”

I teach an AP level seminar that pairs AP US History and AP English Language and Composition. As part of finals, students were asked to research issues and people they were interested in from 1920–2014 in the United States. They were then asked to create two convincing PowerPoint slides using rhetorical strategies. The students all voted. The ten nominations with the most votes prepared three-minute speeches and another vote was cast for the issue or person they wanted to win the Nobel Prize for Democracy in Action.

Overall, I was overcome by the nominations of all of the students in terms of the issues they cared about: gun violence, reproductive rights, immigration issues, equity in education, LGBTQ rights, and others. I was shocked at the number of students who nominated “YouTubers” for this prize. It really made me rethink what I thought about YouTube, student activism, technology, and the interests of students. It was also a great reminder that, as John Dewey suggested, when I make the best decisions I can to set up an experience to optimize learning and then get out of the way, the students astound me!