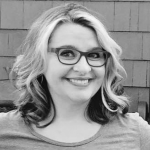 July 8, 2017 In Secondary By nctevillage

It Takes an #NCTEvillage to Raise an Educator

I’ve essentially lived two teacher lives. From 1995–2003, I was a 9th–grade English teacher in a small, rural school district in New York. Somewhere around 2000, I read Speak by Laurie Halse Anderson and immediately put it on my classroom bookshelf. It was “borrowed” at least three times and never returned, and I replaced it every time it went missing. Whoever took it desperately needed it. It made me sad to think of my students hurting like that. The book resonated with me because Melinda holds a secret in and I knew kids like that. (I even knew adults like that.) Realizing books have the power to heal, I knew I needed to always have that book on my shelf, no matter what.

Over time, I read more of Laurie’s work.  Wintergirls impacted me in a much different way; I had just given birth to my daughter and I saw that text through the lens of a new mother. I wanted to do everything in my power to protect my little girl from the toxic belief that her value and worth would be measured in the number of pounds on a scale. Even though I shared the book with several teenagers and young graduate students, I always connected to that particular text as a mom.

I’ve heard Laurie speak in several contexts at NCTE over the years, and I always walk away feeling empowered and intrigued by her words. When her publisher sent me an advanced copy of The Impossible Knife of Memory, I was thrilled to see another YA text written by her. I ripped open the box and read her summary; this was a personal story for her to write and it directly mirrored my own experience as a teenage girl. Her father fought in World War II, my father fought in Vietnam.  Her father had PTSD, so did mine.  Her father was an alcoholic, so was mine.  I’ve never picked up a text that held a mirror so close to my face.  Of course, my immediate reaction was to close the book and avoid it, but once I mustered up the courage to read I couldn’t put it down.  I reached out to Laurie via social media and told her just what that book meant to me.  Shortly after that exchange, Laurie and I were attending the same session at NCTE in Boston. I walked up to her with the already worn copy of the book under my arm and we just embraced. The 13-year-old version of myself craved a book like that!  That girl needed to see herself and her life in a book. Better late than never, I suppose.

Fast forward to the first week of April 2017. I am a professor preparing future English teachers at West Chester University; I am also the advisor for the NCTE Student Affiliate. We hosted Laurie Halse Anderson in my methods class. It was absolutely surreal to host an author who has meant so much to my students and myself over the years. The students sat spellbound by her every word. I even came away knowing some things about Laurie I’d never heard before.

If it weren’t for NCTE, I probably never would have met Laurie. Sure, I would have continued to read her books and share her books with my students, but there’s something to be said for that face-to-face interaction at a conference. I have had amazing mentors and colleagues in the schools where I’ve taught, but I’ve also been given opportunities and have forged relationships with folks across the country because of NCTE and ALAN. I hope to instill in my preservice teachers that an essential component of their careers is professional memberships, like NCTE. I cannot quantify the experience of meeting authors and other educators and engaging in conversations about our profession!