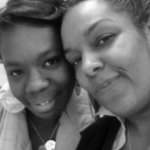 The most beautiful moments in my career have always been when I am teaching the students no one believes in. So often, they also don’t believe in themselves. I believe in them primarily because I am them. I see myself in their eyes.

For someone to understand why I chase our children, endure great hardship to support them, and hold them to high standards, that person would need to know my story. I was only 15 years old when my crack-addicted mother pushed me out into the world without parents, guidance, or protection. It was my punishment for defying her decision to sell me for drugs. Every night I was sexually assaulted and I feared sleep when it came. I was brilliantly Gifted and Talented. I learned at an accelerated pace and was a self-taught genius. No one knew or acknowledged it, however. Who would have ever known that a stranger’s desire to pick up a homeless teenager would not only speak to my talents, but also send my life on an upward trajectory into the throes of my destiny? That beautiful woman’s name is Ms. Janis Russell. Every young urban kid in poverty needs one person to do that. She was my one. I, in return, aspire to be that “one” for as many children like me as I can. Because I know both their struggle and their journey, I hold them to the same expectations that I would have appreciated a teacher doing for me.

I teach at an at-risk, low socioeconomic status school. It’s that same moment when their frustrations about my lofty expectations wane and my students realize I push them because I love them. From going headlong into Chaucer to exposing my students to Albert Camus’s phenomenal Absurdist essay “The Myth of Sisyphus” to helping students acknowledge proclivities and boulders, it’s not always what they want, but I understand it’s what they need. Do the students fight me at first? Most definitely. But when you don’t give students an opportunity to be mediocre, they don’t have much of a choice but to acquiesce to their brilliance.

At the end of the day, my students are exposed to elevated content and complex diction, but not necessarily so they can compete with the world. It’s more important to me that my students access those pockets of knowledge that, in their communities, they wouldn’t be privy to even though the content applies heavily to everyone. For example, at the beginning of the spring semester, my students return to school from winter break to find we are delving into what they believe is one of our most cynical units, existentialistic philosophy. By the time we get to Absurdism and Nihilism, students establish an aesthetic connection with writers such as Sartre and Kafka simply because they’ve never encountered such views before. After they get over the difficult-to-pronounce titles, students begin to unlock a part of their potential that could have possibly been lost on them. They fight at first. Then they begin saying things like, “Ms. Whitted, I feel like I’m in college.”

While reading “The Myth of Sisyphus” by Albert Camus, my students gained access to one of the foremost myths on both mortal suffering and triumph. Through the eyes of Camus, students have an opportunity to see that each of us have victory on the other side of our boulders (challenges). When they first start reading it, they feel challenged. There are so many words they don’t know and so much of the myth they don’t understand. But they soon learn that those words are a different way of speaking they had never heard before -– yet those words express the exact same feelings and thoughts they have about life.

In the end, students have a project. They need to think of their biggest obstacle, that one thing that makes them feel like Sisyphus does when he pines for the beauty and camaraderie he misses on earth, the moment Camus states, “this is the rock’s victory.” They ponder the reasons why Camus pulls us into the text and says, “These are our nights of Gethsemane.”

In addition, they are challenged to look at and own their victory and analyze the moment when they become Sisyphus. (“[Their] silent joy is contained therein. [Their] fate belongs to him.”) Their projects reveal not only their interpretation of this highly difficult text, but also a deeper understanding of their lives in relation to it. Creating that aesthetic connection to the texts that most teachers might not dare share with students who are considered low readers and even lower achievers exposes them to something they may not have read on their own while also increasing each student’s view of self. Now they understand Sisyphus, and for the moment they too become absurdist heroes. And in teaching them how to embrace the hero within, I become the hero Ms. Russell was to me.